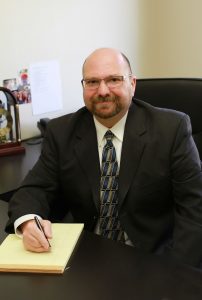 Marc Dion is a two time recipient of the Ventura County Bar Association’s James D. Loebl Award, and he is a two time nominee of the California State Bar Jack Berman Award of Achievement for Distinguished Service to the Profession and Public.

Mr. Dion was President of the Ventura County Family Law Bar Association.   He was also appointed as the Legislative Coordinator for the California State Bar’s Standing Committee on Delivery of Legal Services.

Marc grew up in Ventura County. He attended Moorpark College, graduated with his bachelor’s degree (B.A.) from California State University Bakersfield, and obtained a master’s degree (M.P.A.) from the University of Colorado, Denver.

He was offered a scholarship and attended law school at Creighton University where he participated in several competitions, including representing the school in the nationally held ABA negotiations competition.

Prior to receiving his Juris Doctor (J.D.), Mr. Dion had a career in law enforcement. During his law enforcement career in the state of Colorado he held positions as a police officer, patrol sergeant, state agent, and chief of police.  He also sat on many boards including regional drug task forces and child protection teams.

Marc began his legal career in Creighton University’s legal clinic representing low-income clients in court on family law and landlord-tenant cases. He went on to clerk for a Superior Court Judge and worked as an attorney with a law firm in Westlake Village before opening his own practice.

Mr. Dion is certified in juvenile law (CRC Rule 5.660 & VCSC Rule 12.02) and is a trained mediator.  He excels at taking the time to explain the legal process to his clients.  He has the flexibility and skill to negotiate generous settlements or take your case to trial, depending on the specific outcome you desire.

One of the top three Attorneys near Thousand Oaks & Westlake Village

What Our Clients Say

“In this day in age, it is hard to find quality of your caliber when it comes to legal services.”
– Ron G.

“I’m so pleased with the time, energy, and interest you put into our case, not to mention taking our phone calls after hours.”
– Sally C.

“Thank you for helping me through the most difficult time in my life. You are amazing, caring people.”
– Julie K.